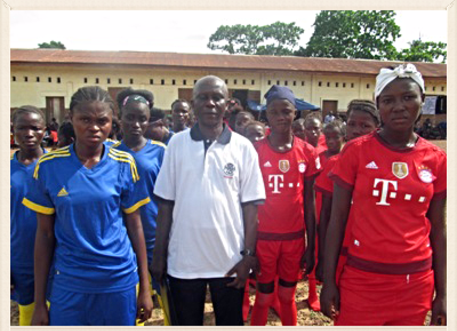 It began with the registration of all school teams and individual athletes for track events. This was done simultaneously with receiving and welcoming of community stakeholders that were invited to perform functions in the launching. The turnout of community stakeholders was encouraging though the it coincided with other sensitive community issue. Therefore, the programme started a little bit out of schedule for the said reason. Please see attached programme of events.

After prayers and introductions, the Executive Director of Comin-SL Pastor Peter K B Alfred welcomed all and sundry and thanked them for coming to grace the occasion.  In his key note address, he called on stakeholders to reflect on past glory days of the community with regards to sport. The Director also explained in retrospect the mission of Comin-SL in Mano Dasse active in service delivery to the community, reference to assisting schools with teaching and learning materials, furniture and awareness raising training program with actors involved in supporting the promotion of education in the community. Making reference to sportive activities, he ignited the minds of both stakeholders and beneficiaries that when the current project is treated seriously, there will be high possibility for the Mano Dasse community to produce international sport men and women. He said many sport men and women making headlines at international level from Sierra Leone and other African countries are coming from rural areas. He therefore called on all to grab the opportunity and make successive use of it. Before closing, he mentioned the aims and objectives of the sports project as follows:

To use sports as a tool to bring peace and sustainable development to young people and their communities towards nation building.
To organize sporting activities in communities with the view of sporting talents to develop them professionally for national and international engagements.
To bring education, healthcare, skills training and economic empowerment of young people for sustainable livelihood etc.
To evangelize the sports men and women and community members generally.
To educate the young people and community members in human rights, moral and character building for attitudinal and behavioral development.

The Pastor closed by asking parents to encourage children of sports talents to be committed and disciplined in every area of life.

Pa Lawrence Moseray, the acting chiefdom speaker thanked the Director for the patriotism he always manifests in bringing such viable projects to the community. He assured the Director that the chiefdom authorities will protect what he referred to as valuable initiative. He prayed that the Lord perpetually bless the Director and his team and donors who are supporting these projects to transform their community and lives therein.

He expressed appreciation and satisfaction for the project. He said they have been yearning for unity and peace promotion among the youths, schools and community members, and he sees the sports project as a symbol of unity, peace and inclusion for co=existence and sustainable development. He promised the Director that he will ensure that the youths work diligently towards positive results to achieving the project goal.

The SMC Chairman, Mr. Hassan Jah commended Pastor Peter Alfred for the good initiative. He said the package if translated into positive action will not only benefit the chiefdom and her people but the country at large. He said if a player goes international, they will not say Mano player but Salone player. He therefore assured the Director the stakeholders will support the youngsters in the venture. He called on all the young people to make the best use of the opportunity offered them.

Before going further, the Director in the watchful eye of the beneficiaries, invitees, well-wishers of men and women and community members present, on behalf of Christian Outreach Justice Mission Sierra Leone and FC Bayern Fan Club Sierra Leone presented the sports kits to Mr. David Kajue for official launching of the project for their children. Nearly all stakeholders spoke with one voice and similar tone on the occasion. Making his statement on the availability of the sport kits that includes jerseys, hoses and two footballs for the game. Mr. David S Kajue called on all especially the children stating that launching was not about the lunch to eat at school but for all to know that the initiative which processes have been carrying on paper work is now evidently seen and can be practical zed for the general good of our children and the community. He encouraged the young people to take advantage of what he called golden opportunity with every seriousness and responsibility. He assured the donor and partners that their effort will be protected and preserved. He prayed for Pastor Peter Alfred and team for good health and prosperity. He called on colleagues community stakeholders to give support their kids in outdoor sports which are now engulfing/overtaking the whole world.

In her closing courtesy, she confessed that the community has been praying for such an opportunity, and now that it is here, the community must support the initiative. She called on the stakeholders to lend hands in terms of giving their ideas so that sustainability will be assured.

The opening program commenced with track event and it was limited to one hundred meters’ sprint involving competitors from the secondary schools in Mano Township. Both boys and girls participated with excitement because it was seen as the beginning of all form of sports since a ban was slammed on sports in 2014 to fight Ebola scourge. On the same day, the under fourteen junior boys of Ansarul Islamic played against St. Theresa and ended 0-0. One of the team played as FC Bayern Salone and the other Comin United FC.

Day two was lined up with three teams of female and male teams. The first game was between amalgamated primary schools (Sierra Leone Church and United Methodist Church) versus Ansarul Islamic primary school. That particular game was organized that way in order to ensure that schools without JSS and SSS are not left out and the said game ended 0-0. On the other leg, Hope’s Rising Secondary School under 16 (Sixteen) played against Dasse Agricultural Secondary School, and it also ended 0-0. About three hundred people including the technical team, stakeholders, teachers, students/ pupils being sports men and women who took part in the two days events were catered for with refreshment.

ACTION POINTS FOR GROWTH AND SUSTAINANCE

Develop MOU between participating schools embracing beneficiaries of the sports outfits and the organization
Open registration of membership  into FC Bayern Fan Club in Sierra Leone
Develop annual fixtures in quarterly form that will accommodate the school calendar
Further mobilize strategic partnerships in the attainment of set objectives
Disseminate the report to various partners and would-be partners for their consumption
Mobilize resources in terms of volunteers, technical assistance, materials/logistics and funding grants for the consolidation and launch (replication) of similar activities in other communities in Sierra Leone
Help beneficiaries with educational, skills training and spiritual needs for their holistic growth