After three years at school, missionaries including American Peace Corps took over the rest of my education onto the completion of-college at the then Institute of Public Administration And Management (IPAM}, and now University of Sierra Leone based in Freetown, where I read for social work.

Upon successful completion, I worked with the aged, the handicapped and street children with various social service providing institutions in Freetown for a number of years to serve others like they had done to me some years gone by, otherwise I wouldn't have been educated. Opportunity of this same type opened to my younger Sister and that enabled her to get educated as well.

For quest of trying other things, I pursued courses in the hospitality and travel industries being the Hotel and Airline, and worked in both for some years before I joined the human rights world.  Again, I undertook a number of training to be properly equipped for the work.

While at the Amnesty International Sierra Leone Section, I became a born again Christian at the NTC Church in Freetown. As I continued the urge came to be trained and to let go of the other things in order to serve God and humanity through a consecrated ministry.

Ater about eight years of dedicated service for maturity in the faith, I finally formed the Christian Outreach Justice Mission Sierra Leone otherwise referred to as Comin-SL, with other well-meaning Sierra Leoneans. Now, I am a Pastor, a social worker and human rights activist doing kingdom work and serving humanity at the above named organization/ministry to give back what I had freely received through His love, favor and grace on my life.  Because as we are blessed so we should bless other lives.

May God richly bless you for caring to help.

I am a Sierra Leonean by birth with both parents from Southern parts of Sierra Leone, being Moyamba and Bo Districts. We are six surviving children including three women and three men out of eleven of the same parents, who were subsistence farmers with little or nothing for our education. For that matter, they had wanted to send me to learn the Islamic education which I started but brief and stopped for want of western education.

Though my background was almost 100 percent Muslim at the time, the parents however respected my choice of going to school and hence sent me to the Roman Catholic Primary school as I preferred. By this time, I was about age fifteen. This was the turning point of my life by the mighty hand of God through His grace. While at this school, I willingly converted into being a catholic. 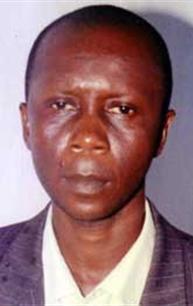